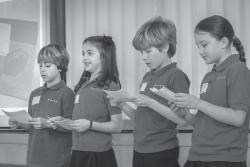 Despite a rocky start and apprehension from Conejo Valley Unified, charter schools in Thousand Oaks and the district have enjoyed a comfortable relationship with one another for the last several years.

From the March 24, 2016 TO Acorn…
Despite a rocky start and apprehension from Conejo Valley Unified, charter schools in Thousand Oaks and the district have enjoyed a comfortable relationship with one another for the last several years.

There are three schools within the city that are charters: Bridges, Meadow Arts and Technology Elementary (MATES) and River Oaks Academy. Despite not answering to CVUSD, the charters are still considered public schools.

“They are a part of the public education system; they just have been freed of some of the Education Code but are still funded by the California taxpayers’ dollars,” said Roger Rice, deputy superintendent of the Ventura County Office of Education. “They still have to take statewide tests, follow the state standards.”

Jay Guidetti, executive director for Bridges Charter School, gives opening remarks during a breakfast Feb. 19 at the Thousand Oaks school. Charters have been criticized for taking students, and therefore money, away from school districts. Bridges Executive Director Jay Guidetti said he looks at charters in a different light.

He said the schools are a way for parents and a school to partner together without the bureaucratic hassles of a traditional district.

“We’re not trying to take kids away from the local districts,” he said. “What we are doing is letting people know that there are schools out there that are independently operated, that we can truly partner with parents and the community without so much red tape.”

Read the full article at: http://www.toacorn.com/news/2016-03-24/Schools/Local_charters_make_headway.html